40 years of manufacturing for the Aubrilam brand 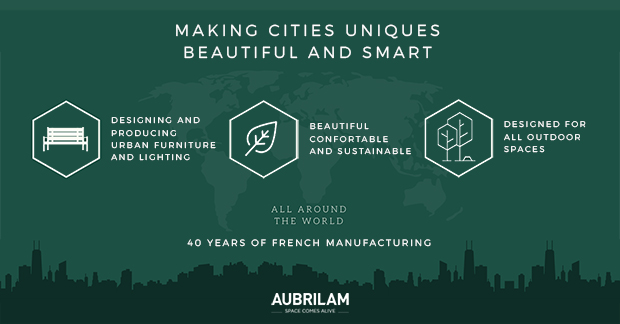 Many projects have seen the light of day across France, Europe and around the world since the creation of the Aubrilam brand in 1978.
So what is its objective today ?

The world is changing and new issues are emerging, the population in cities is increasing, our linving spaces are changing, the impacts of global climate change are becoming an increasingly important factor in the choices made by decision-makers and users. Citizens today need to find meaning in their lifestyles.

Aubrilam is constantly preoccupied with these issues and its priority is to stay on course: developing ranges that make sense, that provide comfort while having their own singularity. The furnishings designed by the men and women at Aubrilam are heading in this direction.

What does Aubrilam do ?
Aubrilam designs and manufactures complete ranges of products, both standard and customised. The products are manufactured in our factory in Brioude, France, 70 km from Clermont-Ferrand. Boasting 40 years of experience in wood and outdoor furniture, we continue to innovate, to choose the most suitable materials and to use production processes that are ever more environmentally friendly.

For who ?
The products that come out of Aubrilam are intended for all outdoor spaces, whether in an urban environment, a shopping area or by the sea, they respond to the need for outdoor living. They can be installed in all climatic environments: humid, saline or very cold areas and are designed to resist.
The projects for which they are intended can be part of large, high-profile urban programmes or Simply small, more discreet spaces.

Why ?
To make spaces welcoming and Citizen-centric, with the comfort and improvement of their living environment in mind. To provide a solution to the problems that clients will encounter as our society evolves.
Finally, to make urban spaces sustainable and vibrant…

How ?
By providing product and service solutions to our clients, being tuned to them, being by their side from the project start to finish, being involved in the concept, design and budget optimisation choices and being there at the installation and further down the line for the maintenance.

Design a product that mirrors a site: 20 years of bespoke projects at Aubrilam 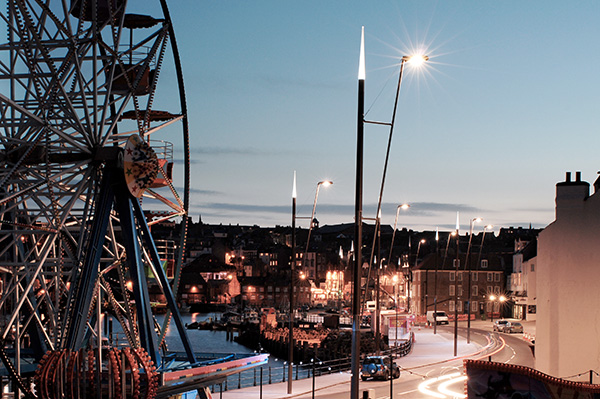 For more than 20 years, Aubrilam has been working with purchasing advisors and contracting authorities to design the products & solutions they imagined for their projects. These are often prestigious projects, where the identity of the place is very pronounced and where technical challenges can be significant.

Installed in every kind of area, like large urban centres, seaside, moutain areas or shopping malls, these products perfectly find their place. Materials and technologies used can be adapted to every layout: structures with tensile stretched canvas, lighting mounted in high installations, fixation of flags and banners, integrating LED lines of lights, adding specific pieces for floodlights or decorative elements, brackets and special ties for catenaries, etc.

Here are some examples of projects implemented by Aubrilam:

Our first significant project is the layout of Mediterranean high-speed train stations, for which a whole range of products were designed by the AREP agency: lighting columns inspired by the catenaries of train lines. The “Catelam” columns are made of wood and aluminium. The design of the elements forming the column, associated to the choice of materials, have created a link between both the modernity of train stations and its traditions. The connecting elements, brackets and aluminium bases, were specially designed for the project. 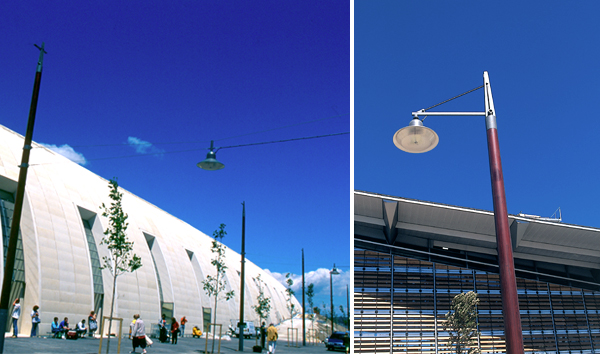 In some instances, our solutions are closely related to the place in which they are installed. For the harbour city of Scarborough in England, facing the North Sea, the lighting designers from consultants Speirs & Majors, were inspired by marine imagination to give a new identity to this historical city and its lighthouse, while still maintaining a human scale. The goal was to provided a new vertical momentum, while taking inspiration from yacht masts present in the harbour. Wood found its place in the project from the very beginning. 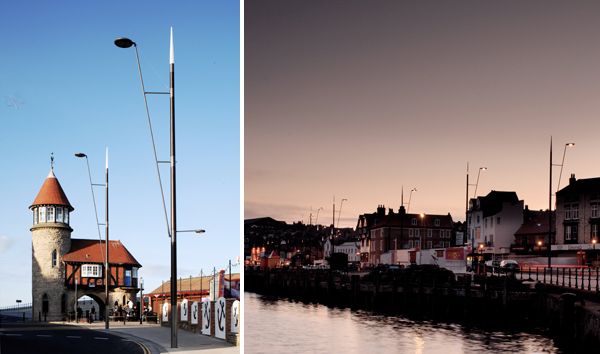 In the Netherlands, in the city of Papendrecht at the South-East of Rotterdam, the intention was to design the landscaping of a shopping centre. This project’s aim was to offer to the future clients lighting furniture that would be an integral part of the site. For this city that is almost completely surrounded by water, the idea was once again to take inspiration from boats and sailing. Columns attached to wooden railings refer to the deck of a boat, the metallic parts attached on top could be imagined as a boat sail. 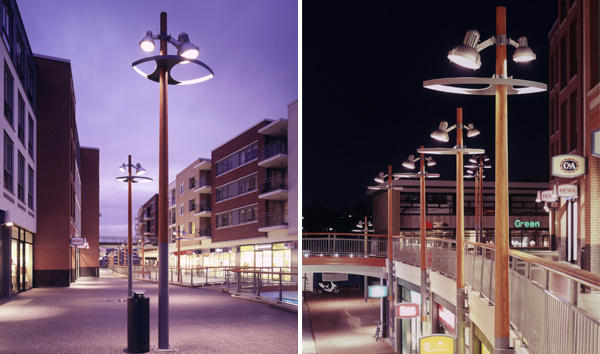 Bespoke products can also be created for urban regeneration programs. In 2008, the square around Poitiers’ train station was renovated and we created, for this project, lighting furniture that made the connection between the old & new buildings. The challenge was to maintain the buildings scale ratio and to clear the visual perspectives. The 16-meter-high twin timber shaft columns that were designed for this project act as signals visible from afar by drivers, by night and by day. The dark wood stain used brings a constrasting effect with the blue highlights from led beacons. 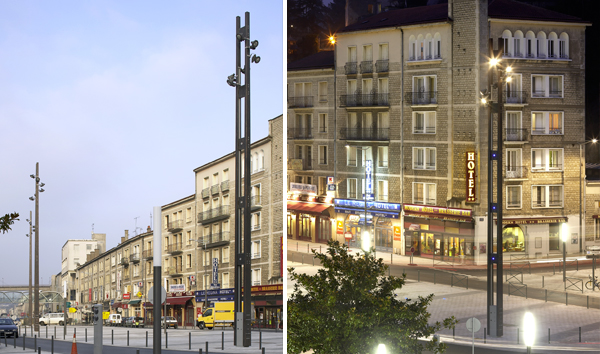 Members of the projects mentionned in the article:

This summer, what will be the furniture that brings colour to our cities ?

Whether it is in small village squares, restaurant terraces or new urban parks, outdoor furniture will have the place of honour this summer. Both functional and practical, it also contributes to the harmonization of places where they are installed. The choice of colour is especially significant in the arrangement projects.

It gives us the opportunity to introduce to you several choices of shades that we have associated with our new ranges of furniture, CLUB and RENDEZ-VOUS.

We invite you on a journey, change of scenery, rest: the first colour combination that we created combines an orange-pink to green.

These tones call to mind the ochres painted on the exterior walls in Southern Mediterranean Europe or the summer fruit like apricots or peaches … And green for the trees, freshness … Some rest.

These tones also evoke patterns specific to this summer season, just like Mathilde, designer at Aubrilam, highlights it:

“Summer means staying out until the very last rays of sun, landscape changes and becomes orangy … those belong to the magical moments of the summer nights.”

Discover CLUB and its colour variations 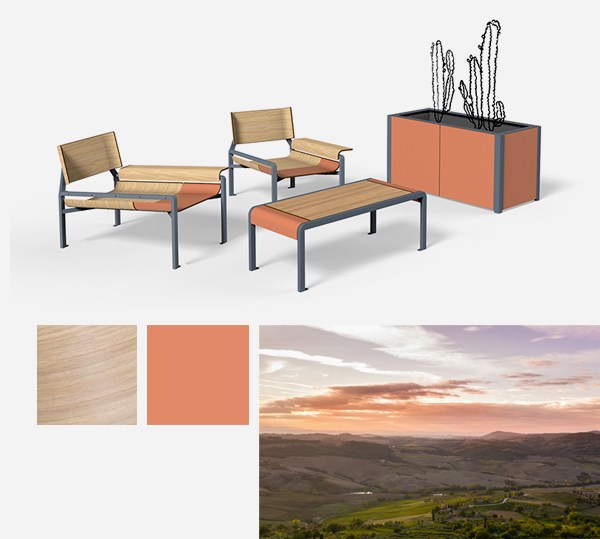 Our second shade choice is dedicated to the RENDEZ-VOUS range. We used the metal hoop as a coloured label. Bright and vibrant, the yellow colour underlines the particular design of the round bench and deckchair. It is associated with natural wood whose grains are visible and randomly spread.

We wanted this association of colour and material to change the perception of the place where the product will be installed. The RENDEZ-VOUS furniture can fit out a new area in a large urban centre as well as a seaside near a holiday resort.

This installation could be an invitation to gather during summer nights for a picnic, share some family time in a living place … For an open-air screening … Or during a festival.

Discover RENDEZ-VOUS and its coloured association 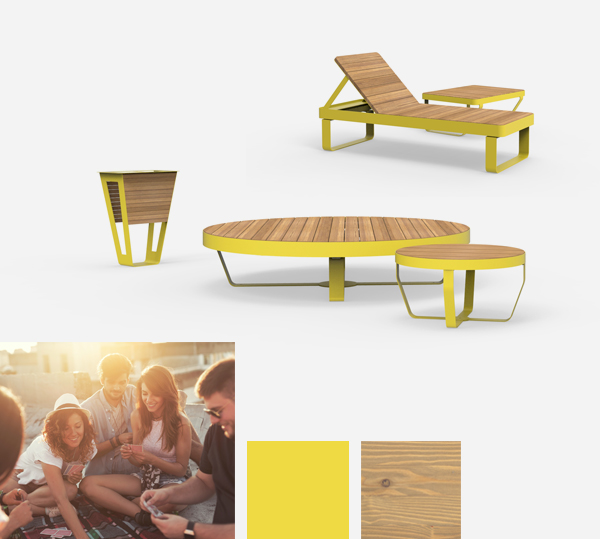 Here all Aubrilam News in pictures by subscribing to our account: